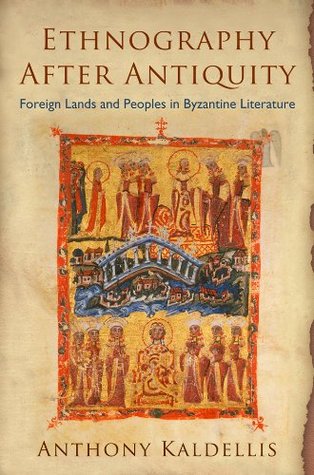 Although Greek and Roman authors wrote ethnographic texts describing foreign cultures, ethnography seems to disappear from Byzantine literature after the seventh century C.E.—a perplexing exception for a culture so strongly self-identified with the Roman empire. Yet the Byzantines, geographically located at the heart of the upheavals that led from the ancient to the modern world, had abundant and sophisticated knowledge of the cultures with which they struggled and bargained.

Ethnography After Antiquity examines both the instances and omissions of Byzantine ethnography, exploring the political and religious motivations for writing (or not writing) about other peoples.Through the ethnographies embedded in classical histories, military manuals, Constantine VIIs De administrando imperio, and religious literature, Anthony Kaldellis shows Byzantine authors using accounts of foreign cultures as vehicles to critique their own state or to demonstrate Romano-Christian superiority over Islam. He comes to the startling conclusion that the Byzantines did not view cultural differences through a purely theological prism: their Roman identity, rather than their orthodoxy, was the vital distinction from cultures they considered heretic and barbarian.

Filling in the previously unexplained gap between antiquity and the resurgence of ethnography in the late Byzantine period, Ethnography After Antiquity offers new perspective on how Byzantium positioned itself with and against the dramatically shifting world.

Comments
Comments for "Ethnography After Antiquity: Foreign Lands and Peoples in Byzantine Literature":